A career in satire 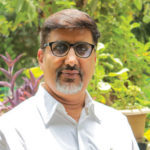 Shekhar Gurera has spent years observing the common man in an effort to add wit and character to his work as an editorial cartoonist for several leading Indian publications.

His experience with various leading media houses has been memorable. Shekhar’s longest association is with the Punjab Kesari group of papers. He started career as a budding cartoonist with them in 1984. Now based in Gurgaon, he works as an editorial cartoonist for several Hindi, Punjabi and Urdu dailies from other states, such as Jag Bani, Hind Samachar, Navodaya Times, Nava Bharat, Central Chronicle, and Sanmarg. Shekhar has also worked as an illustrator for most national media houses (Express Group, TOI Group, HT Group, and Pioneer Group) at different time periods. “While there is a charm in working on topical issues, there is also a risk – he says, – there are always feelings of responsibility. Over the years I have learned how to carefully select the best topic, minimize the wording, and meet the deadline.”

Shekhar believes, that the field of cartooning basically includes three basic skills – that of journalist, satirist and artist.

“I personally feel, – he says, – that no education can make one perfect in cartooning. There are examples of cartoonists who have switched over after entering other professions. In my case, I never needed to show any degree at any stage of my career. At some level I tried my best; I never avoided any topic related to science while exploring my understanding of cartooning. Obviously fine art skills helped my sketching.” “There is no definite method for choosing a topic for the cartoon,” – he admits. “Sometime a first casual look at a newspaper headline gives you a striking topic, and sometimes you can reach the deadline and still remain dissatisfied with the final outcome. Previously I used to depend only on the morning newspaper for inputs but now, due to all the other available media, I can catch and even change the topic of a cartoon till the last moment.”

Read this story in POOL 83.