CHASNI, a powerful animated film about a day in the life of a victim of acid attack is making waves both in India and internationally. Abhishek Verma, the twenty-six year old maker of CHASNI, shares the making-of story with POOL. Tell us a little about yourself and what led you to an education in Animation?

I love story-telling, experimental narrative, experimental animation, illustration & writing.I am a recent graduate of  M.Des in animation from the Industrial Design Center at IIT Bombay.

I belong to the place called Hazaribagh, one of the major districts in Jharkhand. Since childhood I have been inclined towards drawing, art & crafts thanks to my higher secondary school (St. Xavier’s Hazaribagh), which provided me ample exposure to art & culture. Listening to the the national radio channel, “Vivid Bharti”, while growing up also developed in me a keen interest for cinema & storytelling. All of these interests came together at my design education at IIT.

What led you to create CHASNI?

On 1st May 2013, there was an acid attack on Ms. Preethi Rathi at Bandra Terminus, Mumbai. This was amongst one of the most brutal attacks that happened at an extremely crowded railway station. Its brutality attracted the attention of news agencies nationwide. It left me stunned when I read Preeti’s handwritten notes ( she had scribbled in a hospital notepad, expressing her concerns about her new job in INS Ashvini, her face, economic conditions of her family, medical expenses etc.) published on one of the newspapers. After going through her notes, I decided to follow the case in print and online media.

On 1st June, Preeti died of the intense internal injury caused by the acid attack. The incident affected me immensely and led me to take this topic as my film project. In the beginning I wasn’t sure about the animation as a medium for my theme. However, when I approached my mentor, Prof. Shilpa Ranade, with my idea, she was more than willing to guide me along and through her support,CHASNI came to life.

What kind of research went into the making of CHASNI?

The basic research started with reading about acid attacks, related cases & interviews of the victims available in the internet. I watched many films & documentaries available online.It slowly became apparent to me that disfigurement was central and common to all victims of acid attack . Disfigurement (virupan) has its manifestation either through crimes or through accidents or it could be natural alimony to one. The forms are burns, acid attacks, slashing of face, any kind of accident, by birth etc.

My vision for the film got clearer as I continued my research. I wanted the core of my story to be ‘Disfigurement’ with the sub story focusing on acid attack.The 130 seconds narrative in CHASNI is spoken word poetry which brings to fore the emotions I underwent while listening to the experiences of the victims of acid attacks. It was a huge and overwhelming task but I wanted it to be a part of the film.

That is quite some research there Abhishek, and a brave effort. Can you tell us a little bit about the animation process?

The animation process for CHASNI started with my internship. I would like to acknowledge Paper Boat Animation Studios,where I did a month of internship. They helped build my confidence with all sorts of technicalities required to complete the animation film.

After finalising the narrative, I focused on character design,rough animation/animatix and styling.

The character design process underwent lots of discussions with my mentor, Prof. Shilpa, before the final character emerged. We decided to keep the character vague and obscure, devoid of the usual decorative features of a woman. We also decided to go with monochrome as the color with a tint of mellow flavor to it. Our focus was on the line quality in the film, which highlights the character against the background. 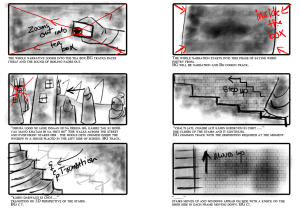 What do you want people to take away after watching CHASNI?

Just introspect. I hope the film makes the viewers introspect about their own thoughts and actions and current moral norms of the society. The case of disfigurement is very common, it can happen to anyone, but we don’t see them amongst us. There is something not OK about it!

How are you promoting CHASNI?

I am trying to present the film everywhere I can. The main hubs are film festivals (national & international), Youtube, Vimeo and other websites that promote social concerns. The film is also on stopacidattacks.org and they are promoting the film at their level to increase awareness.I have also presented the film In Zagreb, Croatia where it was appreciated very much. 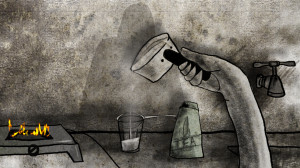 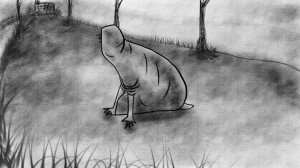 That sounds like you are going in the right direction. Are there more animated films we can look forward to?

Thank you. There are two projects am working on. Both of these are short animated films. One is based on homosexuality and its acceptance in our society, while the other film is about the human interaction to oneself and with others.