When were you first drawn to the camera?

I learnt art early on and have always been drawn to the beauty in the play of light and shade. Soon, I knew that I had to pick up the camera and learn how to capture this beauty for real. I worked with the analog cameras to get the perfect details in the shadows and the highlights. This experience gave me immense satisfaction as an artist.  I spent almost a decade working as a photographer, during which time I was brand ambassador for Fuji India and an artist in residence in France in 2006-07.

Once I had mastered exposures, it was all about what I was capturing. My curiosity for my city, which was also my muse, made me delve into what makes it – the people, the culture, and history. It led me to capture Kolkata’s whole length, from the histories of the extreme north to those of the south, and the intersections with the communities that make it what it is today. In 2007, the work was published as a coffee table book Calcutta: Repossessing the City.

Since 2010, my photographic work has taken the form of installations, with an ever-increasing presence of the plight of girls and women in the red light area. Though the visual language received a good response abroad, deep down I wanted my audience to be the Indian public. That led me to understand the language of the public at the School of Visual Arts, NY.

Tell us about the MISSING Public Art Project.

My exploration of my city took me to my current preoccupation with the burning societal issue of sex trafficking of young girls. My deep empathy for the girls started to reflect itself in my work as an artist. I dealt with the issue by creating complicated installations within gallery spaces that brought up the dark realities of sex trafficking in a very graphic way. But this did not seem right. To create mass awareness, I realized I needed to distill the issue into a simple, engaging piece of art that spoke to everyone and transcended language and space.

After my stint at the SVA, I came back with my head rolling with ideas. Knowing what I wanted my work to do and say helped me chart out my next steps. By then, I knew it was going to be a silhouette, which would work as a remembrance of girls who have gone missing. It was a distillation of my thoughts, and is a product of an intense artistic search for a visual language, depicting the utter tragedy of the loss of these girls in the dark holes of trafficking. In 2014, I launched the MISSING Public Art Project to engage the public on the issue of sex trafficking. It was the culmination of years of my work on the issue. In Kolkata I had worked in Kalighat, Bow Bazaar, and Khidderpore and spent a lot of time with Ruchira Gupta, founder of Apne Aap Women Worldwide. I tried to understand the angst which she and the others working in these spaces faced because of the constant and growing demand which led more girls to be put out to be sold.

MISSING had a good launch at the India Art Fair and immediately caught the eye of many international and national media through its installations, the larger than life black silhouettes of young girls placed against the urban skyline. Constructed from iron sheets, forged and painted pitch black, they seem like sharp, black holes cut out into the sky. Holes, into which, millions of girls disappear from the face of the earth. It was meant to invoke in the eye of the beholder the sense that something is gone. It serves as both a symbol of what is and is not, what we must address – a reminder, not an illusion; a fact, not a suggestion; something permanent rather than ephemeral. The months after that were very slow, as the corporate patronage we were seeking didn’t materialize. It was during this period that I continued my work in Bow Bazaar and made a short film on Jaya, one of the survivors working there.

What kind of impact did the film have?

The short film created on Jaya’s life was shortlisted for the YES! I am the CHANGE Film Award, and it was there that I saw the power of social media. I saw the way they have been able to engage a huge community on the digital medium and get participation from the youth. This germinated the idea of doing a similar campaign for the MISSING Project. If my intention was public engagement, then why did I have to wait for my installations to get sponsorship? The digital platform gave me the power to start the engagement right at my desktop. This also led to the first thoughts of exploring the idea of crowd funding and making the MISSING Project for the people, by the people. A successful crowd funding exercise would have also made people think about trafficking and its detrimental effect on the social fabric of our country.

We then started building an online community through social media outreach. This gave us an insight into what people think, how they think and what points or platforms can be a catalyst or a game changer in shaking the status quo in our society with regards to trafficking for sexual exploitation. We wanted to build an army that would join us in our cry to end demand for vulnerable young girls and women.

How did you take it further?

At this point, the crowd funding not only helped us prepare for the amazing opportunity to bring out our first set of public installations in future but also gave us a golden opportunity to create the MISSING Game for a Cause. This was a one-of-its-kind gaming app, engaging the public by putting them into the shoes of a trafficker.

We also thought of a means of powerful public engagement at the ground level – something that was very visual as well as impactful, with a high recall. That is how the stencil project came to life through the MISSING silhouette.

The MISSING silhouette is seen again and again across the country in the street stencil project. We collaborated with Every 8 Minutes (a campaign to stop child trafficking) to take the MISSING silhouette through an awareness campaign in the thick of the red light areas of the country. To engage the youth we conducted awareness campaigns with Jamghat, PPES, Anupshahr, RAHAT, Kishanganj, STOP, Nedan Foundation, Kokrajhar, and Udayan Care in Delhi; Paint Our World in Kolkata; Vatsalya in Jaipur; Prerna in Mumbai; and APSA in Bangalore. We realized the power of the stencil. It has become the most visual and powerful part of the MISSING campaign.

This journey created a milestone with the formation of the Missing Link Trust in October 2015 and we continue to work tirelessly and passionately to reach out to more and more stakeholders through all our campaigns.

Why did you choose the medium of a game to address trafficking?

There’s a huge market for gaming worldwide and with India set to have 800 million+ smartphone users by 2022, we see a huge potential for growth. We wanted to sensitize the youth on the issue and highlight the role that demand plays in human trafficking. My game designer and I traveled to the red light districts and used first-hand information and accounts to build an authentic and sensitive experience. The MISSING Game for a Cause exposes the user to the life of a trafficked girl. It is a role-playing game designed to put players in the decision-making seat and allow them to experience what a ‘missingirl’ goes through when she is trafficked into the cruel world of prostitution. Players assume the role of the missing person, making choices and assessing risks for themselves to find their way to freedom. The gameplay and storyline invoke discomfort in the player through the intensive and claustrophobic experience of being in the victim’s shoes.

How successful has it been?

The MISSING Game for a Cause is a combination of adventure, puzzles (environmental and micromanagement) and RPG. It is developed in a responsive format so that it can be released on multiple platforms and translated into Indian vernacular languages. Primarily, the game is targeted at Android, IOS and PC and is easily playable for anyone with access to a smartphone. This gives us the ability to reach and create awareness amongst a vast and varied, urban and rural audience. The game has the potential reach of millions in all parts of the world, and most importantly in remote areas where other traditional means of awareness generation cannot penetrate with ease.

Soon after its launch, the MISSING game won the NASSCOM Indie game of the Year award and received 820,000 organic downloads across 70+ countries on the Google Play Store and App Store. The initial localization in Bengali organically reached the #1 spot in the Bangladesh Google Play Store within a week of its launch. The game forms a crucial part of our school and community-level awareness programs in the rural and urban belts of India.

How are you using use art and technology for social change?

MISSING’s mission is to combine art and technology in innovative ways to engage the public in a highly visual and impactful manner, leading to awareness against the issue of sex trafficking. Each facet of our campaign uses this to sensitize the public on the issue. We want our engagement to provide knowledge as arsenal to children, women, young girls and boys so that they can avoid being victims of trafficking. Also, we want to have an undercurrent running across our programs that mind shapes the young males in India into de-objectifying the female human body and creating more sensitivity and empathy towards gender differences. We also want to create an environment among young girls where they de-clutter their concept of femininity, which is currently overridden by the masculine gaze.

In this pursuit, we have used art and technology in a variety of successful campaigns and programs. The MISSING mural walk aims to start a dialogue with urban India about the dark world of trafficking (the public is the biggest stakeholder in this issue). Each city has its own set of murals and chatbot narrative. The murals invite viewers to talk to the artwork via a facebook chatbot.

We are currently working on a new MISSING game (MISSING: The Complete Saga), an augmented reality application, and interactive comics for schools to consistently engage the public on the issue of sex trafficking with art and technology.

What is the importance of awards in your line or work?

Every time MISSING receives recognition, it gives us the conviction to take the next steps in our campaign. We consistently chart new waters and receiving awards such as the Nasscom Indie Game of the Year award told me that the intuitive move to make a game was a great step to sensitizing the public on the plight of millions of girls in the dark world of sex trafficking. Every award and recognition has been a great propeller and learning experience for us. It gave us wings to fly further.

This article was originally published in POOL 105. 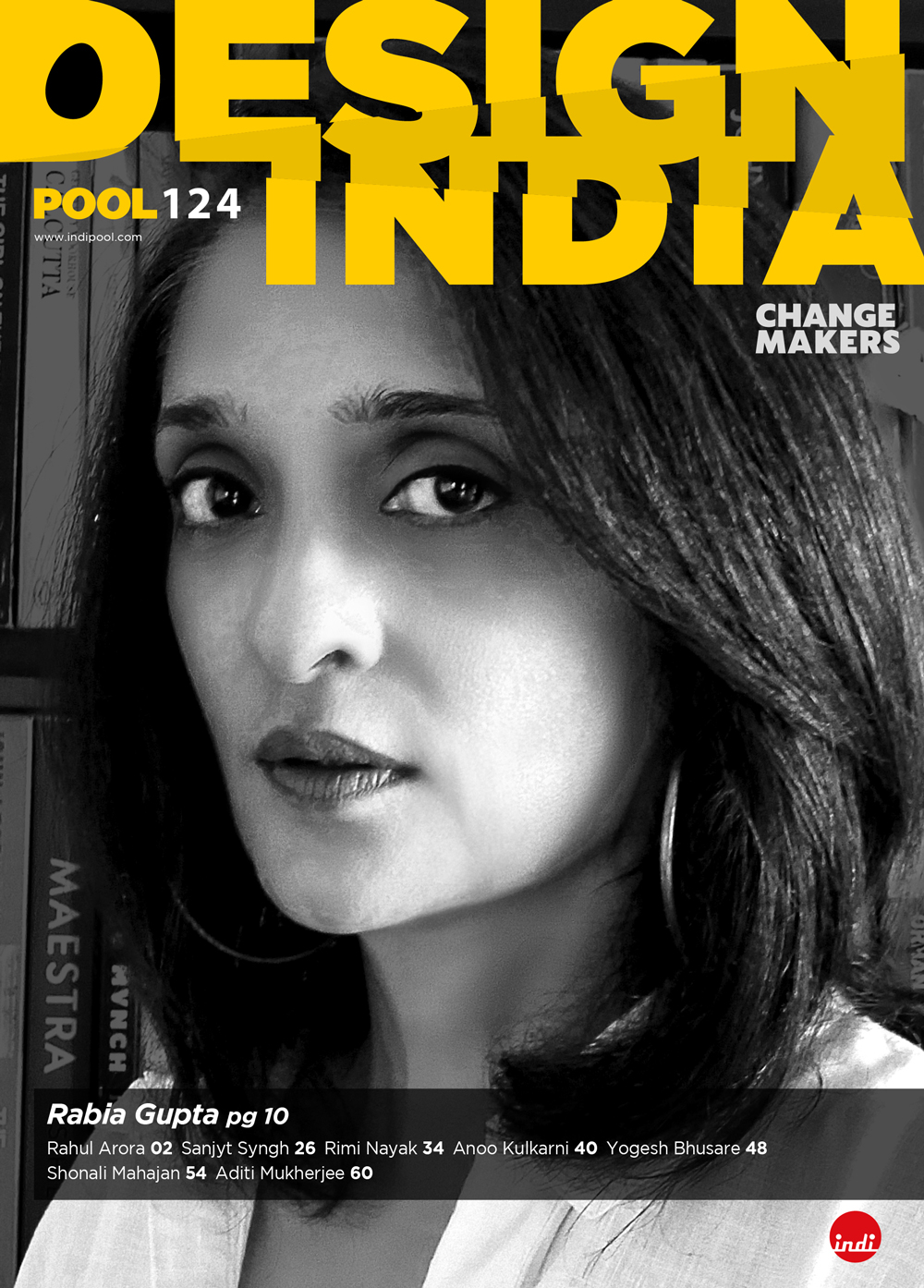