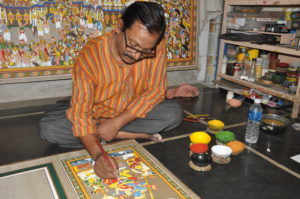 This April, for the first time in Mumbai, ARTISANS’ presents a solo show of a National award-winning Patta Chitra artist, Bijay Parida. The show will not only celebrate this distinctive style of painting but also offer new ways of engaging with it. To top it all, celebrated Odissi exponent, Daksha Mashruwala will offer a series of talks that blur the lines between art and dance.

Having been trained for five years with the prominent artist, Gokul Bihari Pattnaik, Bijay is proficient in both Pattachitra and palm leaf engraving. In 1981 he was awarded with the Lalit Kala Academy award, as well as two National Awards since then. He has taught more than 200 aspiring traditional artists.

Today, the Orissan Pattachitra encompasses beautiful icon paintings soaked in myth and folklore. They are illustrated on walls, palm leaves, playing cards and cloth with natural mineral colours and superb craftsmanship. It is an art that is rooted in the worship of Jagannatha, an avatar of Lord Vishnu in the temple of Puri. 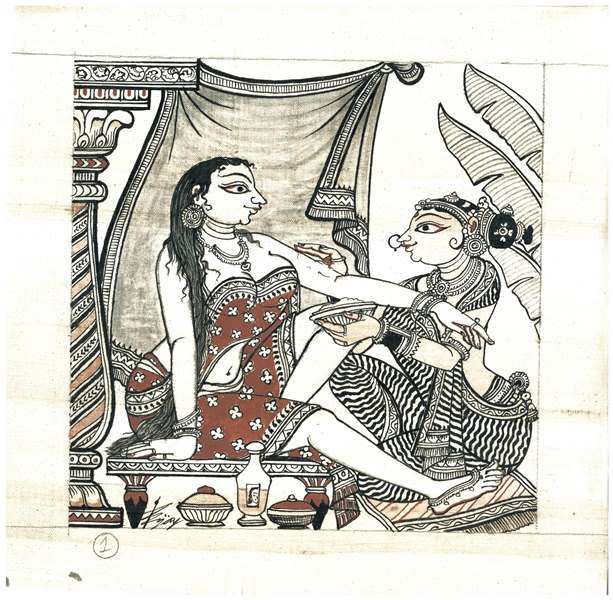 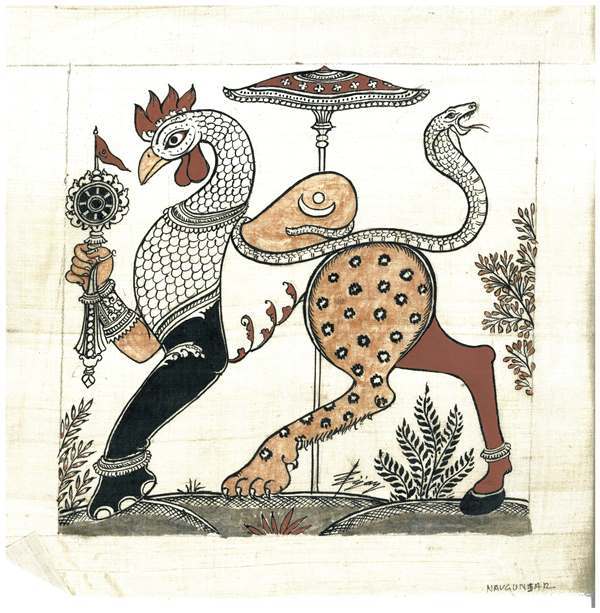 In ‘The Dancing Line’ artist Bijay Parida explores popular themes found in pattachitras – the many seasons (Shada Ritu) or avatars of Jagannath, the Dasavatra (ten incarnations of Lord Vishnu), various episodes from the Ramayana and the Mahabharata, and more. The patta paintings of Parida also turn to Oriya poetry particularly the Gita Govinda, a body of work composed by the 12th-century Indian poet, Jayadeva, a central figure in Odia culture. Gita Govinda explores the relationship between Krishna and the gopis (female cow herders) of Vrindavan; the text is also integral to the Indian classical dance form, Odissi.

The Dancing Line features artworks created using a tassar cloth as a base. While most artists have switched to using colours bought from the market, Bijay Parida continues to use colour pigments obtained from minerals and natural materials.

Pattachitra follows certain set conventions of painting where a painting follows a series of stages on drawing. Human figures are abundant in Pattachitra and are rather stylized in their depictions. The body is featured in a frontal position with the legs and face in profile. Conventionally, faces in patta paintings have long beak-like noses, prominent chins and elongated eyes. Female figures are draped with a sari like garment whereas for the male figures, the torso is left bare except for an uttariya, a long scarf, which goes behind the neck and comes over shoulders to full down to thighs. 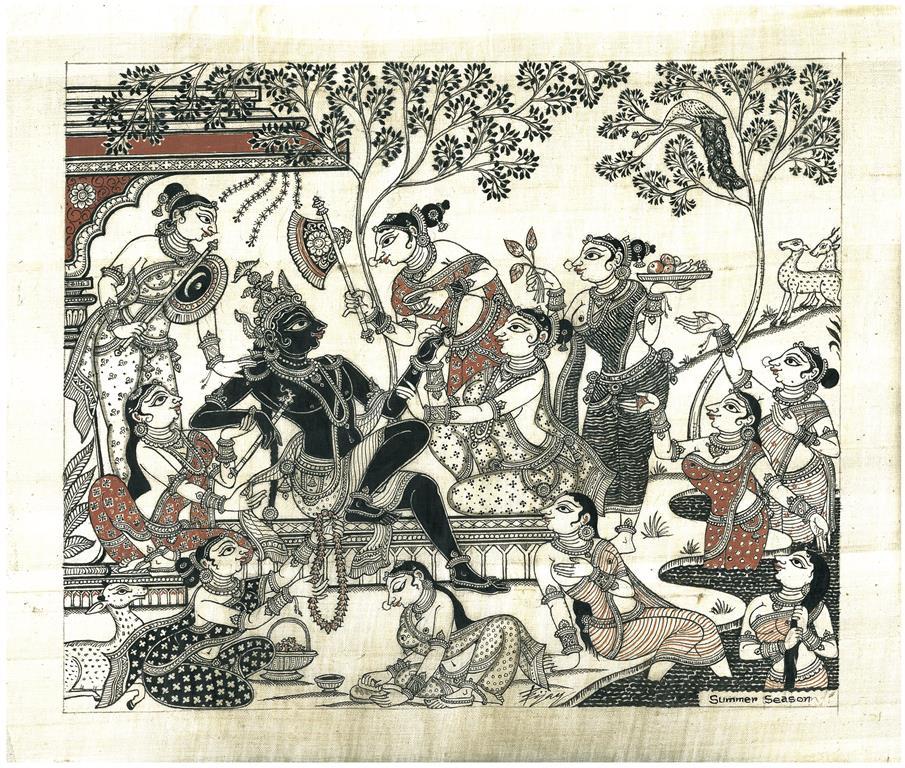 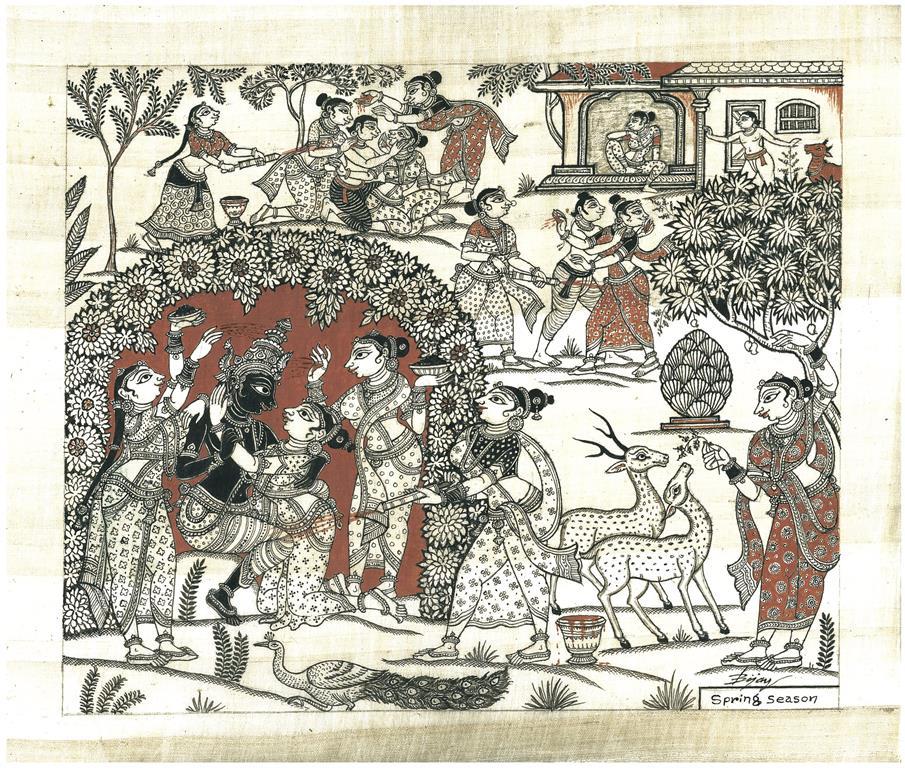 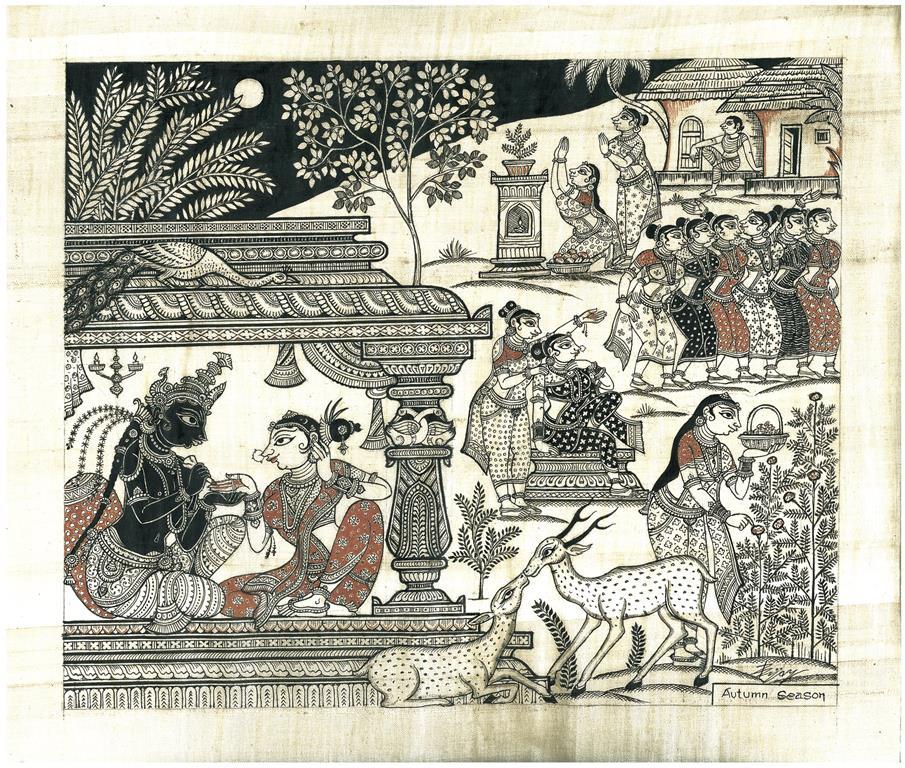 The different types of postures used in the paintings include the Tribhangi (three bends), the Virabhangi (heroic posture) – in which the figure is shown with the chest thrown forward and Lalita bhangi (delicate posture), which is used for all females. Traditionally the paintings carry religious themes depicting stories of gods and goddesses. In recent years, however there is trend of secular motifs.